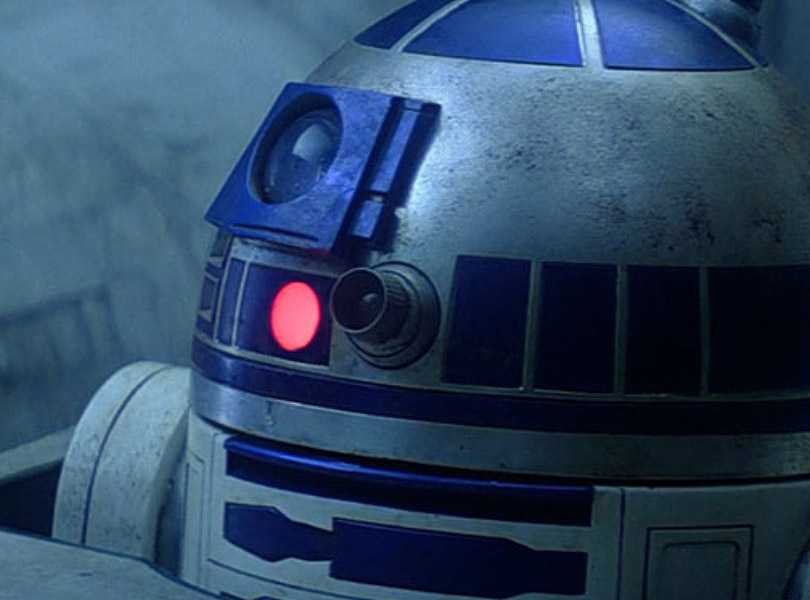 Disney’s D23 event is quickly approaching and we can’t wait for more Star Wars news. We are expecting to see a new trailer for The Mandalorian, a Star Wars live-action series set to premiere Nov. 12 exclusively on the Disney+ streaming service. If we are lucky, Disney will drop a new trailer for Star Wars: The Rise of Skywalker. Hopefully it will feature loads of new content, but still leave a little mystery for wacky fan theories.

All this excitement for Star Wars has us thinking about some of our favorite scenes featuring R2D2. This delightful astromech droid has saved our heroes across the far reaches of the galaxy. For the sake of this list we decided not to include any events that occurred in novels, comics, or animated series. Otherwise, the list might never end.

5) Getting Attacked by Jawas and Screaming for the First Time (Star Wars: A New Hope)

The moment Artoo and 3PO crash land on Tatooine the two droids can't stop arguing over which way to go. After a heated exchange of beeps and boops they each go their separate ways. It starts to feel like an eternity before something even remotely exciting happens, but Artoo delivers. Unfortunately, it comes at the expense of getting captured by Jawas. The moment a Jawa zaps Artoo with a stun gun, his circuits are overloaded and the poor droid belts out a scream that will never be forgotten.

4) Shutting Down all the Garbage Mashers on the Detention Level (Star Wars: A New Hope)

One of the duties of an astromech droid is to "wait by the car.” However, Artoo tends to get a little antsy in his metal pantsy. It’s a good thing too, because our heroes often call upon him like a fairy god mother to grant wishes when the chips are down. Luckily for them he can always deliver the goods. In A New Hope, the entire gang is about to be flattened into mush unless Artoo can shut down the garbage masher. In true Artoo fashion, he got there just in the nick of time.

3) Fixing the Hyperdrive on the Millennium Falcon to Escape Bespin (Star Wars: The Empire Strikes Back)

The Empire Strikes Back marks a low point for our heroes. Nothing seems to go their way from start to finish. The Millennium Falcon reminds you of a car you once had that just wants to die, but you’re committed to getting it fixed. The poor ship is in dire need of repairs and Lando assures Leia and Chewbacca that his boys will handle it. Cut to the daring escape from Cloud City where the Falcon is getting shot at from all sides. All Chewy needs to do is put in the coordinates, calculate the route, and punch it into light speed. And… nothing. She’s still busted. Artoo plugs into the Matrix, err… wrong movie. Plugs into the onboard computer and fixes the hyperdrive. Boom! This droid has some real gumption and saves the day again.

2) Igniting Oil to Cook a Pair of B2 Super Battle Droids (Star Wars: Revenge of the Sith) 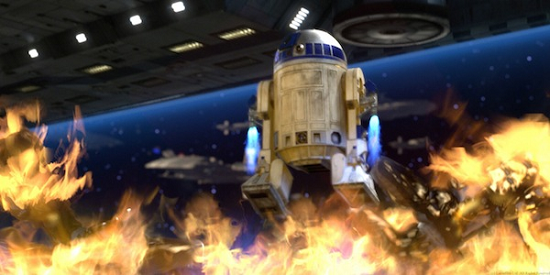 The prequels probably set a record for most droids destroyed in a movie. Often times they were sliced in half by a lightsaber or blown to bits by a blaster. One of our favorite ways to destroy a battle droid comes from our buddy Artoo. In Revenge of the Sith, while aboard General Grievous’ ship, the Invisible Hand, Artoo is spotted by a pair of B2 Super Battle Droids. When the Super Battle Droids grab Artoo, he sprays them and the surrounding area with oil. Once Artoo activates his rocket boosters the oil ignites and melts the Battle Droids as he flies away to safety. Well played, Artoo.

Rescuing Han Solo from Jabba’s Palace was a group effort and nothing short of a miracle. It turns out that miracle was in the form of R2D2. I literally get giddy in my seat when Luke signals Artoo to launch his lightsaber in the air. Furthermore, I about lose my mind every time Luke activates his lightsaber, revealing its green glow. At this point, it's obvious Luke planned to get captured and charged Artoo and 3PO (I suppose) with getting close to Jabba. This way when it hits the fan, Artoo will be ready to assist in the escape. Freaking Awesome!

There are a few other moments that always put a smile on our face, but they didn’t quite crack the top 5. Things like reuniting with Luke on Ahch-To or the playback from Leia’s message that sets our heroes on their path. What are some of your favorite R2D2 moments? You have a lot to choose from over the course of 42 years. Please share them in the comments below.