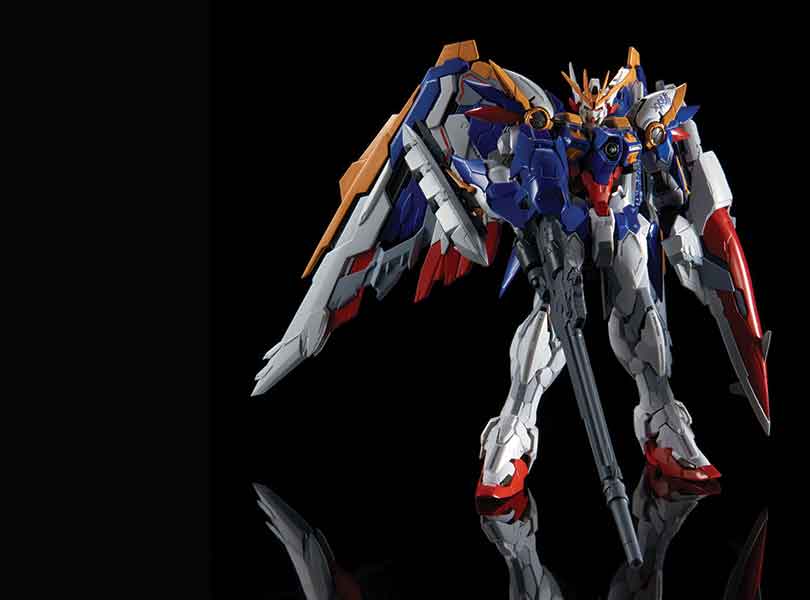 A Bandai Hobby Online Shop exclusive release of the Wing Gundam from "Gundam Wing" in its EW appearance. New opening gimmicks have been incorporated into the design of the wings while still allowing it to be able to transform into Bird Mode.

The Hi-Resolution model series comes with a combination plastic and diecast pre-built frame that offers extraordinary detailing and posing capabilities. Armor is made of high-quality plastic materials that has no need for paint or alteration and features different finishes ranging from high gloss to pearl to metallic.

The Wing Gundam EW is Hajime Katoki's redesign of Wing, created following the release of the Gundam Wing sequel OVA/movie Endless Waltz; which has been prominently featured in the Glory of the Losers manga re-telling of the series (among other works). The redesigned Wing retains largely the same armament and abilities but resembles the Wing Zero in appearance even more than before and can be equipped with extra energy cartridges to enable its buster rifle to fire nine shots per use instead of three.

Previous Totoro Fans will not be Disappointed with these offerings from Benelic
Next Join us at Anime NYC in Booth 225
Related Posts
SDCC 2018 1/72 B-Wing Starfighter (Limited Edition Ver.) by Bandai Spirits Hobby
Read or Watch: Manga vs Anime
Bandai Hobby and Tamashii items are coming to Premium Bandai US!
Getting to know THE ROBOT SPIRITS (Ka signature) <SIDE MS> ZZ GUNDAM
Categories